The Mojito is undoubtedly the most popular cocktail in the UK today, and one of the most popular in the world (that number one I am fairly sure is the Margarita). Many a bartender will moan about the fact, as the various facebook groups regarding Mojito hatred will attest. But we all know this is all to do with the repetitive nature of making 8 mojitos at the same time again and again, and little to do with the cocktail’s quality.

The earliest precursor to the Mojito was from Cuba, and a drink known as “El Draque," named after Her Majesty Queen Elizabeth 1st’s favourite pirate, Sir Francis Drake. so a fair bit older than the 19th Century stories about picking mint in Kentucky next to the Derby (not true, but a nice one to tell customers anyway. The first mint julep was actually made with rum). Whatever the Mojito may have been called back then, if would have been made with a primitive predecessor of rum, but with the same other ingredients used to hide the harsh taste. Some insist the Mojito's name comes from 'mojo', a Cuban seasoning made from lime and used to flavour dishes. Perhaps as a reference to its lime ingredient, the drink became known as the cocktail with 'a little mojo' - in Spanish, 'mojito'.

It is widely stated that the Mojito was invented at La Bodeguita del Medio in Havana, but the place didn’t open until 1942, and there are written record of identical drinks, if not called a Mojito, dating from 1931 and Sloppy Joe’s bar manual, and he had his bar in Key West, Florida. It has even been suggested that Ernest Hemingway himself may have brought the drink from Cuba to Florida as he was a friend of the owner if Sloppy Joe’s, and he spent time moving between Key West and Cuba it the late 20’s and early 30’s. But it was at the Bodeguita that the Mojito became popular in Havana, and Hemingway was a famous regular. 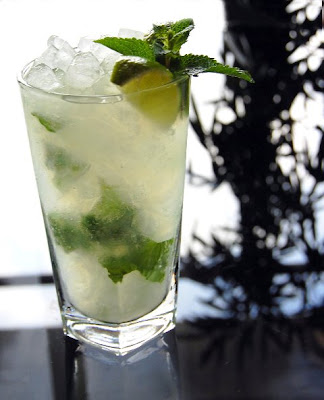 The traditional Mojito is made with White Rum, Sugar, Lime Juice, Mint and Soda, served over cubed ice. The common method of leaving out the soda and using crushed ice stems from one of the most interesting stories in all on Cocktaildom. Before the revolution and Castro, Cuba was America’s playground, and all the bars from Havana to Varadero had lovely state-of-the-art American ice machines which made cubed ice. After the revolution and the associated trade embargo, These machines one by one started to break down, and the Cubans fixed them as best they could but over time the machines could no longer make cold hard ice cubes, but what came out was more of a slush. So they started to leave out the soda from the mojitos, as the drink would otherwise have been too wet. And so was born the Post-Castro Mojito.

The original Recipe for the Mojito calls for white rum, and with a good white rum it is a lovely drink. However with an aged rum the drink takes on many other nuances, and quite possibly served on crushed ice with no soda it is the better drink. But then again, one made traditionally in a pre-Castro style tastes exceptionally good sitting on a beach in Cuba. It is all about context and personal preference, and I would not say one or the other is the better drink.

As for suggestions as to which rums to use, the Mojito is a Cuban drink, so was traditionally made with Spanish style rums, and they are probably the best to use, as the light grassy notes work well with the herbal, floral notes of the mint. Also Spanish rums are lighter due to the fact that they are predominantly made in column stills rather than pot stills, and this means they are well suited to what is a light summery drink. So try Havana Club, or Santa Teresa.

Regarding the sugar and lime components, one of my pet hates with mojitos is when the bartender muddles the mint to almost a puree and hands me something that tastes like mouthwash. I do not go to a bar to spend my evening picking bits of mint out of my teeth. The mint should be lightly bruised, just enough to release its flavour, but it does not need to be broken up at all. For this reason I like to use sugar syrup instead of caster sugar, as the granules tend to break up the mint too much. If caster sugar is to be used, I would suggest that it is done after the mint is muddled with the lime juice. It is important to note that this is not a Caipirinha, and the sugar is not needed to extract lime oils from the lime zest. On this point, I have often seen lime wedges muddled in a Mojito. There is a reason why Constante Ribalaigua used white gloves to squeeze the estimated 10 million+ limes he is said to have squeezed in his illustrious career. It was that bruising the lime too much would give bitter pith notes to the drink, as he maintained that it clashed with the rum flavour, and clearly muddling is the most violent way of extract juice from a lime. It was never done like that in Cuba, and it just smacks of bartenders trying to be different, but without thinking whether the change might improve the drink, which it doesn’t.

With regards to what sugar to use, unrefined sugar adds much more flavour to the drink than refined white sugar. However, bear in mind that if you are making a sugar syrup, Unrefined syrups tend to ferment quite quickly, so make in on a stove, bring to the boil then chill rapidly and keep it in the fridge. Demerara sugar is too dark for my taste and I would not recommend. If you want a darker, more moreish Mojito used an aged rum with unrefined sugar.

A couple of variations I have seen in Cuba is the addition of Angostura bitters, and the use of Guarapo, freshly squeezed sugar cane juice. As for Angostura, it makes an interesting drink, and is tasty, but it takes over a bit, and personally I wouldn’t add it to my own, but it is definitely worth a try. Guarapo is made by putting freshly cut sugar cane through a mangle and collecting the juice. It is simply delicious and as the sweetener in a Mojito it is sublime. However, unless you have fresh sugar cane to hand, it is hard to replicate.

A Nick Strangeway creation for the first menu at La Floridita in Soho. An excellent drink from one of the best mixologists around.

One of our ones at the Loft, a longer drink but one which we sell a lot of.

A point to make about the Mojito is it is a simple drink, and as such there is an almost unlimited number of possible twists. Adding berries, adding fruit juice, changing the mint for sage, basil, thyme, rosemary, etc. It is a drink you can have real fun letting your imagination run riot.
Posted by loft clapham at 04:53